Does your pine appear to be losing its needles? Take a closer look; it may in fact be under attack by the larvae of the European Pine Sawfly. The larvae, “the worms that are eating your pine needles”, are about an inch in length at full size with a small black head and a striped back (two light green stripes and one dark green or black strip on each side).

In the fall, the female sawfly, after mating, will deposit eggs in the current year’s needles (at branch tips). The eggs are deposited through an ovipositor (similar in appearance to a stinger) in a line along a needle and appear as yellowish spots. The eggs spend the winter in the needles and than hatch in late April to mid-May. The larvae feed in groups and will only eat previous years’ needles; they will not typically eat the new growth. 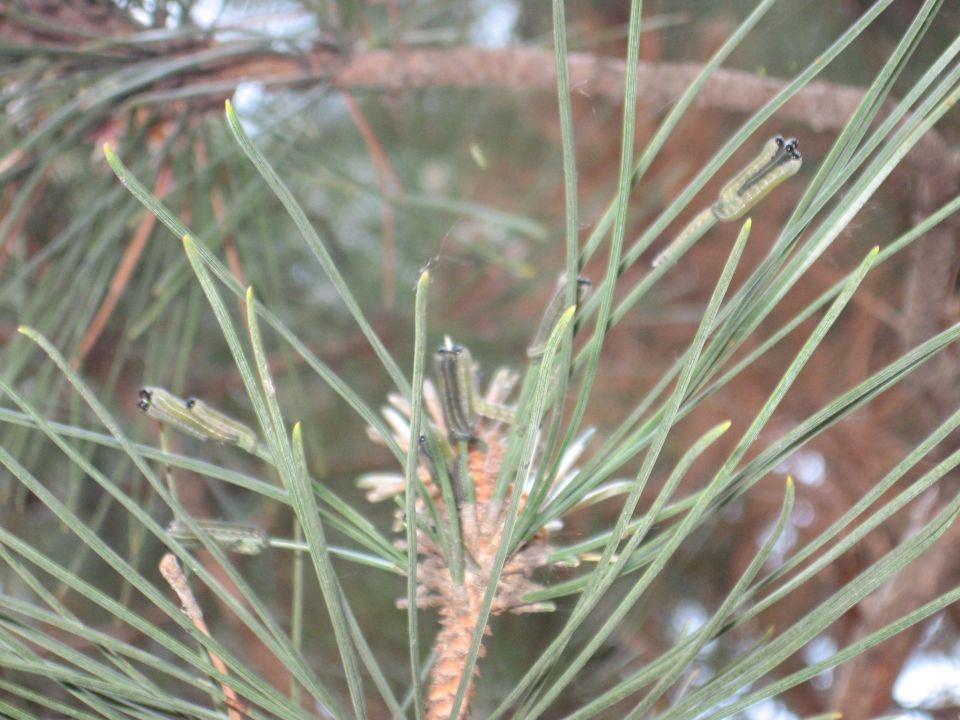 Usually, they will consume all needles (excluding the new growth) on a branch before moving to another branch. The larvae tend to feed from the time they emerge from the egg until about the end of June or early July, after which, most will drop to the ground and spin a cocoon in the duff layer. In the cocoon, the larvae pupate into adult sawflies and emerge in September. After mating, the female sawfly will than deposit eggs in the current year’s needles and the cycle begins again.

As with all species, the European pine sawfly population fluctuates in cyclically. The stretch of milder winters, however, has likely played a role in their numbers increasing recently. Due to the greater numbers of larvae, trees can be extensively defoliated (damaged) and in very severe cases, this could result in the death of the tree. However, since the larvae do not feed on new growth, often times, with proper treatment, trees can survive.

Although, it’s important to note that portions of a tree that have been stripped of needles will not regenerate new needles. Susceptible species include Mugo, Scotch, Jack and Red Pine and to a lesser extent, White and Austrian Pine.

Early detection is best! Inspect needles at the beginning of May for signs of the larvae, including brown straw-like needles and of course the larvae themselves. If detected, you can prune out infested branches or you can try knocking the larvae off by shaking the branches by hand, with a broom, or using a garden hose to spray them off with water. If using a hose, the spraying should be done a couple of times a week during the feeding season. For added effectiveness, step on those that fall to the ground to kill them.

When there appears to be a massive infestation, treatment is most effective when larvae are young (mid to late May). For a more effective control, mix strong dish soap with water and spray infested trees. As the larvae mature, the soap method is less effective. Horticultural soaps or an insecticide that targets sawflies can also be used. Make sure to follow label directions with any chemical application.

Avoid further stress of severely infested/defoliated trees. Water your tree regularly throughout this summer (as needed during periods of little or no rain) to just before the first frost, and watch for other diseases or insects in relation to your tree. Additional information can be found at the Penn State Extension website.